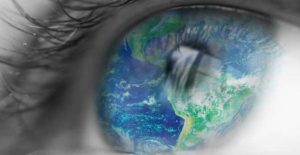 Do you believe empathy is a real phenomena? While the purest form of the word simply means “showing an ability to understand and share the feelings of another “, in the paranormal world we take that definition further to claim that people can sometimes feel the emotions and personal energies of both the dead and the living at a psychic and physical level.

I can’t count the number of people that I have interviewed over the years that lay claim to some form of empathic ability. I personally claim the ability to “tune-in” or open my mind up when I am doing paranormal work so that ghosts can tell me their story at some energetic level. My “gift” (if you believe in such things) has also always allowed me to block these energies once I identify them at least in general terms.

Those of us that subscribe to empathy as an actual ability (or maybe “trait” is a better word) accept that people can be affected by the emotions of those around them, sometimes without realizing it. I personally believe that everyone is potentially affected by the phenomenon to one degree or another – some people are just more sensitive to it, in the same way that everyone is affected by contaminants in the air but to different degrees.

In a related field of belief, many people believe in the “law of attraction”: that by focusing on positive or negative thoughts a person brings positive or negative experiences into their life. Incidentally, lots of people that don’t believe in ghosts or psychics embrace the law of attraction. I think most of us at least believe that our attitudes and the attitudes of those that surround us can have a real impact on our lives.

This all being said, what if I told you that mankind is collectively destroying the world through “thought form” (where something is created or manipulated through spiritual or mental powers).

I have been a mental and spiritual mess on and off for the last couple of years. I have trouble meditating. I don’t feel like I can easily make the personal connection to the spirit world that I could before. My writing and creativity have come to a virtual halt.

I have blamed everything for my state of mind: from the death of my father, to my wife’s cancer diagnosis (and the financial and time burdens that brings to the table), to my own personal shortcomings, to a chemical or hormonal imbalance. And while I have no doubt any or all of these have played their part, I am constantly told by people that keep track of such things that the universe is out of balance: That many psychics and sensitives are experiencing similar feelings and blocks to their talents. Even outside of the spiritual world it is easy to observe that there is a lot of bad things going on in the world.

What if we are being overwhelmed by the emotional state of those that surround us?

I am not going to talk politics to you. But I am going to preach a little.

Our country has been divided down conservative and liberal philosophical lines since the day it was founded. But the divide has become a chasm marked by hatred and rancor and amplified through social media and a 24 hour news cycle looking for something to talk about.

In all of my life I can’t remember ever hating anyone because of who they voted for. I can’t say that I ever even hated someone for what they believed, even if I hated what they believed. That is not to say that I don’t think there are plenty of people who are misguided, misinformed, or downright wrong-headed. That also doesn’t mean that I am necessarily right to the exclusion of all other opinions. Our own environment and experiences will always shape who we are and what we embrace to be truth.

I’ve always tried to save my hatred for actions. The old saying is that we should love the sinner and hate the sin. Well I for one will confess to having no problem hating the sinner when the sinner embraces the sin as a sin. BUT sometimes the sinner doesn’t have the same view of sin as I do, and I strive to factor that in.

The point is that if empathy and the law of attraction are real things, and we, as a society, hate – we send that hate out into the universe where it swells and metastasizes into a force that can be felt and reflected by everyone else in the world who promptly sends it back to us en-mass in a vicious cycle. When we express our hatred through social media platforms we allow it to snowball with like hatred at the speed of light (or at least 4-G speeds) and collect and spread further and faster than ever before.

At the risk of sounding like this is all political, I understand why a person would hate Donald Trump. I understand why a person would hate Hillary Clinton. For most in the United States it seems these are common and basic opposing views. But when we lose or deny the ability to even try to understand the opposing view from our own, we tend to spread that hatred to those that disagree with us JUST because they don’t agree with us.

Just this week I saw someone on Facebook in essence wish that everyone that voted Republican would get sick and die at the hands of a healthcare law that doesn’t even technically exist yet (it’s a bill from the House of Representatives…didn’t anyone else watch Schoolhouse Rock?) I of course am paraphrasing the author, but that is how his post, as worded, came across. Could his emotion translate into a thought form?

I have a friend (and I do still consider her a friend) that constantly rants online about how the President and the Republicans (and by extension everyone that voted for them) want her to lose her insurance and die as if it is specifically a personal vendetta that they all agreed upon in some dark room. Could her constant and personalized drama, which is picked up and shared by those that agree with her, manifest in real energy?

I even spoke on my shows a time or two about witches posting online last winter how to cast a collective spell every full moon (or dark moon, or some moon cycle) to “bind” the President from doing harm. While that may sound innocuous enough, how many of those that participated in the global conjuration held the hatred in their hearts that I am discussing? Wouldn’t that hatred contaminate the magic into something darker than it was intended?

But lest I sound one sided, I have spent a lot of time fact checking and gently correcting some of my conservative friends’ posts (George Soros did NOT serve as a Nazi prison guard. He was too busy being 14 years old at the time). But if a lie is shared as fact and triggers even more hatred, is that energy even more destructive than hatred based on fact?

How can we hope to access the positive effects of the law of attraction when we are constantly battling the negative effects summoned from those that surround us?

Ideas and beliefs used to be able to be shared and discussed. Now we find anything outside of our own world view offensive. We no longer are willing to defend our ideas as superior. We shout down speech that we disagree with. We label. We insult. We break things. We kill the proverbial messenger.

And we all suffer for it.

My objective here is NOT to change your mind about anything. Your beliefs and opinions are valid and are based on your own life experience. Of this I have no doubt.

But I do hope that some of you will take a moment to reflect on whether you believe your emotions are a form of energy and whether that energy is good or bad. You can’t help how you feel. But bad energy, like bad water, can be filtered and directed into positive things.

And in closing I will point out that since I had this epiphany – once I recognized the energy I was dealing with – and I started actively blocking it, my attitude and my energy have begun to shift from the negative to the positive. I have been able to meditate more. My dreams seem to have meaning again.

And I just wrote this.

As my meditation becomes more focused I should be able to block the negative energies I sense even more. As this dark Spring turns to Summer I will have more chances to absorb the positive energy of the sun and ground myself physically to the Earth.

I have also quit spending so much time on Facebook after a close friend took offense at something that I said or more accurately didn’t say. If something is not going to add to my quality of life, I really shouldn’t expend time nor energy on it.

Besides, I would rather offend my friends in person.