Victoria’s Horoscope for the Week of September 3-9 2017

I have yet to decide if I will go ahead and do the sign by sign zodiac horoscopes- though I have a good time writing them, I tend to think going beyond that Sun sign is important. We’ll see. I know people enjoy those, so feel free to let me know if that’s something you’d like to see.

A bit of a little warning, for those of you who may gleefully celebrate Mercury’s direct station this week only to find…things still sucked on a lot of fronts. While yes, Mercury does station direct on the 5th…astrology doesn’t really work that way. Thing is, even after this, it’s still in that retrograde zone until the 19th. What the hell does that even mean? Well, in the shadow period of Mercury retrograde, if you spent the entirety of the event whining and blaming it for every little thing that went wrong: things will still go wrong. Why? Because, well, the truth is, first off, personal accountability is a thing and during the shadow: anything you didn’t address tends to pop right on up. Sort of like “HEEEEEY, remember how you blamed your bad attitude and foot in mouth on me? Guess what? No, you just said some dumb things.” Of course, if you worked on those things, this may not apply.

Astrology, Mercury retrograde included, has never really been an excuse to be an asshole. Sorry, Aries, it’s just not.

Mercury has kinda a gnarly conjunct with Mars, to boot, so tempers have a way of flaring. Figure out why you got so mad, why they got so mad, and go from there. Maybe address…oh, look at that: with both Neptune and Pluto still retrograde- there may be some insecurity issues at play or unrealistic expectations. Want to resolve those pesky resentments once and for all? Try looking within and addressing not what tripped the trigger- but what it was picking on inside of you. Shadow work. It’s a Jungian thing.

Beyond that, it’s not really a bad week, particularly if you’re either owning your stuff or have been. The Pisces Full Moon this week is particularly interesting in that it offers us a choice: be delusional still or gain serious clarity in compassion and kindness. Understanding tends to work that way once we yank back the veil. If you prefer to leave it there, well, you’re gonna have a hard time.

Here’s our chart for this particular Full Moon. 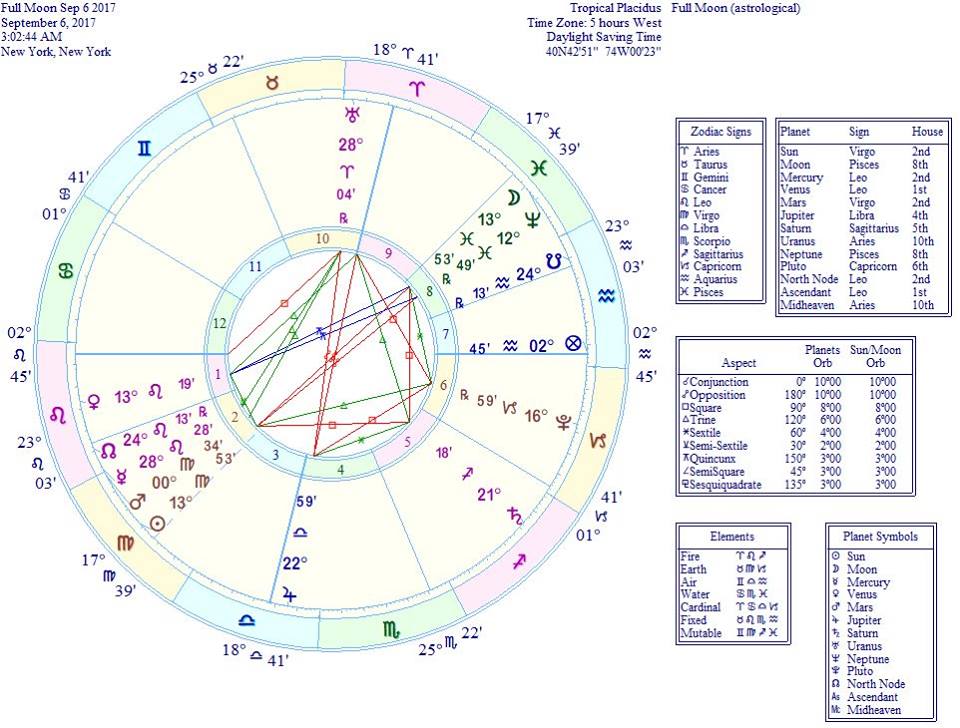 As you can see, this Full Moon on the 6th is at about 13°53’ Pisces. As I mentioned, Neptune’s still retrograde- and Pisces, being ruled by Neptune: gets hit pretty hard. But it isn’t entirely a bad thing. You may find that you get a bit of a spiritual boost of sorts under this influence and you may be remarkably sensitive to the point of strong intuition during the next few weeks of this cycle. Because we’re dealing with the Moon, we’re also looking at relationships and feelings.

The Moon there forms a conjunct with Neptune- which may have you feeling ultra wide to receive here. If you’re not grounded or if you happen to have some buried or not so buried expectation- you might confuse your wants with intuition. It’s really important, as Neptune is retrograde- not to lie to yourself. (Don’t lie to others, either, but that ought to be a given, right?) Unfortunately, this sort of ball of influences here can make you a little more prone to being deceived. Best way I know to clear the way and tell the difference between intuition and fantasy thinking? Intuition’s usually the quieter one. The less intense one.

It’s also not all Fatal Attraction style fantasy, either, so pulling  Doomsday Preppers thing to make sure your bunny is safe or looking up rabbit stew recipes is totally not necessary. This influence can also make you really eyeball people through a very suspicious lens. You may even get a bit paranoid. That would be why I say, ground yourself, find a way to center, because all too often: the boogey man in the closet’s really just someone’s smelly socks. Working these things out involves being open to understanding in the first place- and listening to hear, less to respond.

Because this Full Moon does tie into things you were working with on the big August 21 Solar Eclipse- you really do have a lot of influences at play right now which can prompt you to take some risks. These things are less “Hold my beer” and more changes to further your odds at reaching some long term goals and dreams.

The Full Moon might make you feel just a little unsure about those things, but, this may well just be some confusion and insecurity- working your way through it without dropping the ball is important. Have faith in yourself, if nothing else. Though you may feel discouraged, don’t give up.

As you can imagine, you know, the Moon, relationships. Romantic prospects- if you’re in a relationship, there may be bigger issues than the damn toilet seat. Because of the ultra sensitive yet…kinda clouded nature of this all: just talk about it. Don’t vaguebook the shit and don’t try some weird passive aggressive approach. Just be clear. Start with yourself in recognizing what wants and needs you have- you actually deserve. Often this is why we’re so scared to express those things- we just don’t think we deserve them. Unless you’re an absolute asshole, you probably do.

If you’re single, holy god, watch for those beer goggles. I nearly titled my love horoscopes for this one “Beer Goggles and Bamboozlement” but that editor was so not okay with that. Be extra cautious to watch for the bullshit artists. If it looks too good to be true in love- it may well be, now. Doesn’t mean you can’t enjoy it as it is, but it does mean, don’t start trying to figure out a way of changing your relationship status on Facebook to “Soul Mates”.

Best part of this Full Moon this week is this- man, once you DO have that clarity, there will be very little that can get in the way of your dreams. Oh, it may try, but there are plenty of factors at work in this that will not only keep you going, but renew your sense of purpose and faith. Hold onto those, rather than the fantasy- and you’ll find things have a way of working out.

Victoria Reinertsdatter Horsager (RYN-erts-DAW-ter-HOR-saw-ger) is not a guru, though she is an ordained minister, tarot reader, and astrologer who has been studying divination, spirituality, Theology and the paranormal for over twenty years. She is old and slightly cranky, probably due for some pudding and a nap. She is not the Grand Poobah of anything nor is she of particular fame and fortune. However, she is more than happy to talk your ear off or help you in any way she can. You can find her on Facebook at facebook.com/astrologervictoria/, Twitter at twitter.com/VHeidr or via her website at fluidsparkmedia.com and you can email her at vheidr@gmail.com