The Ghost of a Salesman 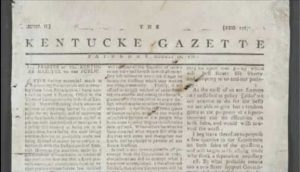 What does $1,237.33 US dollars, 39 people, and two ghosts have in common?  Well, the long and the short of it is people were swindled out of their money by a ghost promising treasure and access to a rare elixir.

In the May 8, 1815 edition of the Kentucky Gazette, appeared an item from The Philadelphia Democratic Press, about the case of Commonwealth v. John Dady.  Mr. Dady was indicted and convicted of conspiracy to cheat.

Apparently Mr. Dady, was quite the character, described as:  ‘a phenomenon in the annals of roguery’, as various residents of the mountainous part of York County were taken to the cleaners as it were, and their wallets emptied.

Mr. Dady had taken up guise of being a physician, prior to which he had under false pretenses presented himself as a clergy.  He became acquainted with two gentlemen, a Mr. Williams a Mr. Chamberlain and a Mr. Hall.  There was some question about a certain location being haunted, and Mr. Williams was certain the location was haunted (the article didn’t elaborate where) and that he had, and I quote: “been born with a veil over his face, could see spirits, and he had been conducted thither 60 miles by spirit.”

So it was that these gentlemen went out to the haunted field, where Williams drew a circle around which he directed Hall and Chamberlain to walk but not speak. Williams stood Chamberlain in view at a small distance (and) heard a terrible screech (this was the ‘black’ spirit), and in the woods a little distance on, in a contrary direction from the place where Williams stood in a few minutes a white ghost appeared and Williams spoke to it in a language that Chamberlain could not understand.  The ghost spoke in a squeaking language.’

The story goes, that after the ghost disappeared, Williams told Chamberlain that the ghost told him there was a treasure, and only 11 men could know about it. The men must be honest, religious, and sensible, but not a horse jockey or Irishman.  (They forgot gullible.)

In order to access this treasure, each of the members of this entitled group would have to be initiated. Each person was given a small sealed paper containing yellow sand, referred to as the ‘Power’. This sand was to be buried in the ground at a depth of one inch, and for three days and nights, carefully watered.

Then, two large circles, 16-feet wide were created in the field and the participants had to dance around the circle, (only one person at a time inside the circle) and the purpose of this was to strengthen the white ghost, so it could over-power an unfriendly ghost named Pompey.

Apparently this process was repeated several times, because the article reports that the appearance of the ‘white ghost’  happened several times, and that Pompey would ‘bellow surly’ at them and throw stones.  At long last, the white ghost provided instructions about the treasure, but first each of the 11 people assembled had to breathe into a piece of paper three times, and this was placed over the six inch hole in the middle of the grand circle.

The instructions were, and I quote: ‘Go on, and do right and prosper, and the treasure I am permitted to write this in same land, I wrote in the flesh for your direction. Take care of your powers in the same and fear of God our protector, if not leave the work. There is great treasure,  $4,000 apiece for you. Don’t trust the black one. Obey orders. Break the enchantment which you won’t do until you get each man an ounce of mineral dulcimer elixir. Some German doctor has it. It is nigh and dear, and scarce, let the committee get it for all (sic). Send one member of the committee to get it but don’t let the doctor know what you are about, he is wicked.”

So, the youngest of this group of gullible souls went to visit this doctor (Mr. Dady), to purchase some of this elixir. Dr. Dady asked for $15 for 1 ounce!  This young man gave the doctor $36 and 3 bushels of rye for 3 ounces.  Each of the members of this group paid Mr. Dady for the elixir.  The transactions reported in the article went like this: $121 – 11 ounces;  $90 -7.5 ounces; $100 (at a rate of $3 per ounce); and the worst was $705 for 141 ounces.  If you do the math, you’ll see that the cost per ounce doesn’t add up from the first transaction.  In total though, about $1,237.33 was swindled from residents in the Philadelphia area.  The elixir was called ‘mineral dulcimer elixir’ a compound later determined to be copperas and cayenne pepper. Medicinally, copperas was iron.

Mr. Williams it is reported carried on this ghostly pretense by engaging with a ghost 40 miles away, and another conspirator, a Mr. Wister, who managed to gather a group of 21 people from the York jail he was incarcerated in at the time!

What was interesting was this scam started to come to light when Mr. Williams’ wife approached a Dr. Rose with a letter telling him how to sell this elixir. She ended up being arrested, and her husband escaped.  Mr. Dady proposed to his other conspirators, a Mr. Kephard and Mr. Chamberlain,  another scheme, which involved revealing how Mr. Williams received letters from the ‘ghost’ – sympathetic ink, which is most commonly known as invisible ink. (Grab your lemon juice, a flashlight, (candles are hazardous) and a secret decoder ring…)

Mr. Dady was eventually arrested and brought to trial, although further research would be needed to find out what the ultimate sentence was for this crime.  Apparently it was revealed that Mr. Dady played the part of the white and black ghost.

So lesson to be learned, if you’re investigating a haunted location, and a ghost asks you for money or wants to sell you stuff, you’re not dealing with a ghost.

Source:
You can read the whole article by accessing the Lexington Public Library website, www.lexpublib.org , and the genealogy/history tab. From there, access the Kentucky Gazette and search ‘ghost’. Image #4, May 8, 1815.

Carol Saarimaki:  I am from Thunder Bay, Ontario, Canada. I am a journalism grad from Georgian College in Barrie, Ont., and also a Broadcasting grad from Confederation College in Thunder Bay. Most recently I am an Office Administration grad from Con. College. I began my journalism interest in high school, (several decades ago) having the opportunity to write for my school newspaper, and my city’s weekly paper, Lakehead Living. More recently I have been writing articles for The Thunder Bay Historical Museum, called Looking Back, which are published in my city’s daily newspaper, The Chronicle-Journal. In 2016, I was chosen to be a contributor in the first Scarefest literary journal, Bloodtypes, and participate on an author’s panel. I have had an interest in the paranormal since I was a child.