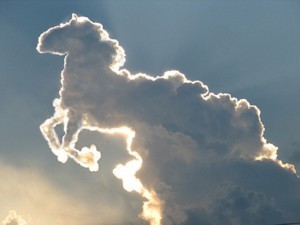 After the show, he emailed me a thoughtful reply to continue the discussion.

“I think that we should be careful when we so quickly dismiss something as pareidolia. Because there are some key critical thinking aspects, as well as some facts that we already know to be true, that we could be overlooking. For instance, we know that some people have gifts that provide aid to them concerning the spiritual world and their connection with it. Such as people that have the gift of sight, whether it be that they can see spirits or visions.”

In essence, he was convinced that the individual patterns from the photograph were paranormal beings, largely based on the psychic gifts attributed to his wife.

Unfortunately, if we want to be taken seriously as investigators and researchers, we have to acknowledge that any gifts some of us may have are not automatically accepted as evidence and the general public will not allow us to make claims based on “Because I said so.”

I am not a skeptic. I do believe that many people have gifts that allow them a higher, clearer connection to “the other side”. But any reasonable person will also admit to you that they are on occasion wrong.

Once we acknowledge and admit that we humans share common flaws whether we are psychic or not, we can then expand the discussion.

Let’s start with perception bias. Perception bias is a person’s tendency to interpret things in ways that are most meaningful to them. A very simple example would be that if I see an attractive woman, I might designate her as “hot” or “sexy”. You, on the other hand might be more comfortable with “That’s my mom, dude!”

The point is that those of us that are desperately wanting to find evidence of the paranormal and display our findings to the public are quite a bit more likely to interpret things as paranormal. While being psychic might give one another input to rely on, the interpretation of that input will still be weighted towards one’s beliefs and desires.

Now let’s look at my own observations of psychics in the field. I love working with mediums. I have encountered several that I believe are truly gifted. But I have also been in enough rooms with two psychics at once to tell you that they don’t always agree on details.

Assuming that both psychics are gifted, but the two interpretations of the activity, messages, entities, or what have you are different, doesn’t that mean someone is wrong? At least to a degree I have to say yes.

My own talents with dowsing are so “respected” (term used loosely) that I have literally had psychics “admit” that they were wrong. I should clarify that this does not mean they were wrong. It just means that someone had to admit they were wrong and for some reason, my abilities and methods usually seem to come out on top.

If we accept that no one is ever always right, then how can we presume that our interpretation of a vague piece of evidence is automatically correct and reliable?

My guest continued to make the point that if we leaned towards pareidolia when viewing such evidence (in this case a mist photograph taken outdoors) wouldn’t we be in danger of missing something?

Maybe. But is there that much value in putting our reputations on the line over data that is easily questioned? Could the evidence do anything to advance the field? Even if there are a half dozen ghosts and/or demons in the mist, can we leverage that information into something useful that we can share? Is our interpretation important enough to “stick out necks” out?

Isn’t there more danger that if we “cry wolf” then people will dismiss us when we actually find the wolf?