It’s All About Protection 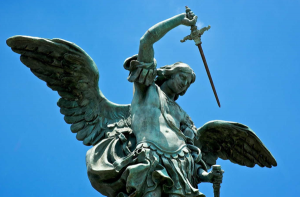 I thought, that having spent the past 25-plus years advocating, promoting, encouraging and educating about the prevention of HIV, and how important protection is, surely the subject of protection and the paranormal wouldn’t be very complex, right? Well was I wrong!

I found during my research on this subject that protection within the world of the paranormal takes on a whole new meaning, one filled with wide-ranging theories and perspectives. The rites and rituals practiced by investigators are as varied as the investigators themselves.

One of the articles I found particularly interesting was written by Pastor David Lai, of tsemrinpoche.com, and he writes about paranormal protection in great detail, from a Tibetan Buddhist perspective. He shared his observation that Eastern cultures are more likely to believe in the spirit world and follow many customs and traditions which embrace spirits, where Western culture is quicker to pass off occurrences as overactive imaginations. I think this is somewhat true.  Many Paranormal investigators looking for unique and unusual evidence, are very quick to validate their evidence isn’t being caused by something in the environment, like noisy plumbing.

What is interesting in Pastor Lai’s article is that his Buddhist approach is not to engage with spirits because of the risk of not knowing whether they will be friendly or not. He suggests various methods of protection, like smudging sage/cedar, reciting mantras, scattering salt, and using protective amulets, talismans, and stones. He fully recognizes spirits do exist and we should live with them as part of our world.

About protection itself, there seems to be a common practice among Paranormal Investigators to perform a protection ritual before an investigation, and even after, to make sure a spirit hasn’t attached to them, and won’t follow a team member home.  This makes me wonder why, and brings to mind something Wes Forsythe, host of Paranormal Filler, has said many times, that we should all be “ass deep” in ghost, with all the people who have died on this earth.  How could we not have a spirit/ghost/entity following us around wherever we go? This notion makes me highly suspicious of the frozen foods section at my grocery store: is something hiding behind those frozen peas? Is it colder than normal in this aisle, or is it just me?

I also discovered that objects can provide protection, the effectiveness solely based on how strongly each person places in it. I asked my friend Matt Jesso, from Northern Minnesota, who is a paranormal investigator, an Ordained Minister, and the host of Paracave Radio, (www.paracaveradio.com),  what his thoughts were. He told me he draws strength from his strong Christian Faith, using prayer before investigations, and sometimes using Holy Water, the Bible, and Cross to provide protection.  It is because these things are meaningful, and provide him with strength, and conviction.

“Go with what has always brought you comfort in times of distress. Whatever religion you practice, offer prayers before you do on an investigation. Look for things in the text of your choice for strength, triumph over fear, power in the presence of evil and confidence,” said Jesso.

There are also talismans, amulets, burning sage (smudging), certain stones and crystals that are believed to help provide protection. I also inquired on a Facebook group I follow, The Dorset Ghost Investigators, and two followers told me their items of choice: anointed oil, and kabbalah amulets. It was stated by more than one person to never go investigating alone, and get permission. I’ll discuss that last bit later.

I  asked my friend Ken Boggle, a Master Tarot Card Reader from Kentucky, (TarotbyKen.com), and he told me he draws his protection strength from being a Nichiren Buddhist.

“Paranormal investigators definitely need a form of protection when going on an investigation. The reality is, whether we believe it or not, negative functions in life exist. Negative entities exist, and dark spirits that drain the human spirit exist, “said Boggle.

“I chant before every investigation. I often bring my prayer beads; I use them in every prayer service, I believe them to be a tool of great protection. Skeptics can say what they like about the power of these objects, but they bring me comfort and strength.”

Aside from objects helping to provide protection, Pastor Lai’s article also talked about emotions and health.

“You should never enter or remain in a haunted site with an angry or distraught frame of mind. Such a negative attitude will only serve to attract negativities and especially negative entities to you. They will feed off the negative energy and become more active and stronger. In dealing with malevolent entities, you should be in a positive frame of mind.”

It’s interesting that my friend Ken shares a similar sentiment: “We are all beings of light, like a moth, certain beings are attracted to that light. Being ‘followed’ by entities that are attracted to that light can and does happen. The more brilliantly one shines, the more enticing they may be to negative forces. This is why a strong spiritual practice is important.”

Since we don’t really have a clear understanding about what is on the other side of the veil, there is a best practice that when communicating with spirits, it is important to be respectful. We can presume that we’re speaking with people passed away, and just as we would with live people, we should mind our manners.

I went onward and continued my question about protection, and asked another friend, Chris Sutton, Shaman and Paranormal Investigator (www.coyotechris.com), and he shared his perspective about protection, saying that if an investigator needs the structure of prayer, chant, and rituals, then they should do this. He also said that it is dangerous to give away your energy to spirits, they don’t need it, and it can be a very dangerous practice.

Protection also needs to be practical, and this cannot be said enough, get permission before you investigate, do a site check prior to going, and note any unsafe conditions. Roaming around a building and falling through a hole in a floor or stairs is not a good thing. It would be wise to have a plan of exit should something go wrong. And no one wants to have legal issues as a result of trespassing on a property.  It is also recommended that you don’t go investigating alone. A good idea because it’s always good to have an extra pair of eyes witness or hear your spectacular evidence, right?

It seems that there’s no right answer, protection is unique to each person.  There are a lot of resources available and definitely a lot of different perspectives. There are no experts in the paranormal, but there are people who have a great deal of experience and most are more than willing to share their knowledge with others. It’s up to you to find what makes the most sense to you.

I’ve thought it would be interesting if the Handbook for the Recently Deceased, which was featured in the movie Beetlejuice, actually existed.  I wonder if there would be a chapter for spirits to protect themselves from over-zealous ghost hunters, and how to get rid of humans.

Be safe, play safe, and be protected, whether in the bedroom or a haunted location outside of the bedroom.  If your bedroom is haunted, then a condom won’t help, just saying.

For more reading the subject of protection, you can visit these websites:

Carol Saarimaki:  I am from Thunder Bay, Ontario, Canada. I am a journalism grad from Georgian College in Barrie, Ont., and also a Broadcasting grad from Confederation College in Thunder Bay. Most recently I am an Office Administration grad from Con. College. I began my journalism interest in high school, (several decades ago) having the opportunity to write for my school newspaper, and my city’s weekly paper, Lakehead Living. More recently I have been writing articles for The Thunder Bay Historical Museum, called Looking Back, which are published in my city’s daily newspaper, The Chronicle-Journal. In 2016, I was chosen to be a contributor in the first Scarefest literary journal, Bloodtypes, and participate on an author’s panel. I have had an interest in the paranormal since I was a child.