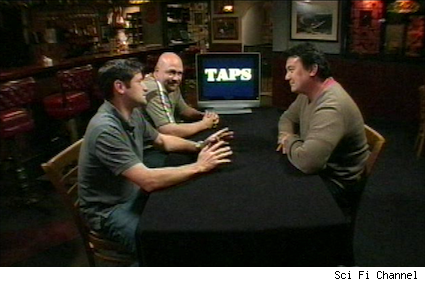 We have all heard the question “is it haunted?” Clients want to know our opinion in the field. Someone on a television gives his or her opinion weekly. There are even persons and groups running about that will “certify” a location as haunted for whatever that is worth.

I don’t like the term because it is subjective and hard to measure.

I think that nearly every place is haunted.

Now before you start accusing me of misleading clients and assuming that all of those “orbs” in my pictures are spectral beings flitting about the countryside, let me explain.

Under my belief system I have no problem accepting that a person’s spirit, or at least an echo or some leftover part of their being might want to and have the ability to hang around and revisit places, events, or even the living for any number of reasons.

If a person believes that, then the math would suggest that even if a very small percentage of those that pass remain here on earth…that could still leave us ass-deep in ghosts just because so many people are dead.

Brief tangent: Loosely quoting the “Ghost Whisperer”, “There are more ghosts in your average shopping mall than a typical cemetery.”

Anyhow, based on my observations of the living, I also have no problem making the leap of logic that not every “lost spirit” would make a deliberate attempt to make their presence known. If you want to test that idea, try to find a salesperson in the sporting goods department of your typical Wal-Mart. Just because you don’t see them, doesn’t mean they aren’t there.

So if we accept that ghosts exist (and I am not saying that anyone has to) – however we define the word “ghost” – isn’t the next logical step to assume that not all of them would be rattling chains and slamming doors? Don’t you think some of them would be perfectly happy quietly observing life? Others might be so wrapped up in their own real or perceived dilemmas that they might not have any interest in interacting with the living (more on that in a future article).

To me, “haunted” is an experience. Through the tools I use (whether you think those tools are valid or not), and the “gifts” that I may or may not possess (depending on whether you believe such things are possible) I think I have the ability to communicate with ghosts. That is to say that I am NOT claiming to be a medium and cannot necessarily call on your grandmother to give me her chocolate chip cookie recipe from beyond the grave. All it means is that I believe that if a spirit is lurking about, I might be able to get them to talk to me…even if they usually are perfectly well behaved and prefer to mind their own business.

So if – and ONLY if – my experiences to date have been real encounters and not the results of an overly active imagination enhanced by ghost stories and ideas put in my head from watching too many hours of paranormal television, would my opinion of whether a place is “haunted” matter without supporting data and evidence.

But since I have had these encounters at locations where I was unsuccessful in collecting such supporting data what should I say?

I interpret my experiences to be real. So if I spend an hour talking to what I perceive to be a ghost, that location is haunted…TO ME.

But I could be wrong. I could simply be misinterpreting the data at hand. I could be reaching into another world that normally would not intersect with our own. I could be completely delusional. I submit that any of these options are possible.

What if you are one of those people that believe that a flash photo full of orbs indicates a room full of spirits? Because I believe spirits can be anywhere, by my reckoning a room full of (possible) spirits does not define a location as haunted as we generally expect the term to be defined. So even if you “orb people” are right and those of us that think we understand the science behind digital photography are completely wrong, does a quiet spirit, minding its own business, mean “haunted” to you just because he wasn’t quick enough to leave the room before you snapped the picture?

What if he or she was just passing through? How would you really know?

I guess you could say that based on my belief system, if every place is haunted then no place is haunted, perception is reality, and any number of other applicable clichés.

I don’t really care if a place is “haunted”. I care about activity.

Activity can be measured and recorded. If I hear footsteps on the stairs I can record that as activity. If I record those footsteps on audio, all the better. The point is that we can document, measure, and weigh activity against possible real world causes without necessarily passing judgment. By using the term activity I can separate that which is measurable from my own prejudices and beliefs.

Is your house haunted? Maybe. Probably. I dunno. That is subjective. It’s like asking if a person is tall.

Is your house active? That can be measured. Now we are asking how tall that person is, and that can be answered.